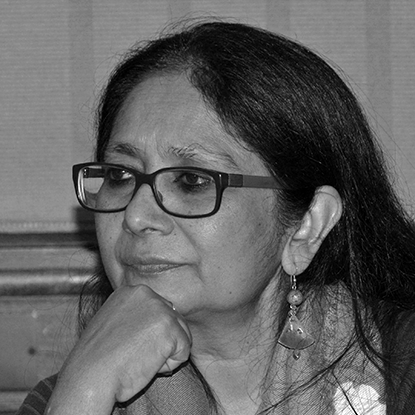 Nupur Basu is an independent journalist, an award-winning documentary film maker and media educator from India . For the last three and a half decades Nupur has worked in both print and television journalism and reported and filmed documentaries in India, United Kingdom,Switzerland, Spain, South Africa, Uganda, Pakistan, Sri Lanka ,Bangladesh , Nepal and Afghanistan .

Formerly a Senior Editor with India’s leading news channel, New Delhi Television – (NDTV) Nupur has also directed several independent documentaries which include Dry Days in Dobbagunta , Mothers of Malappuram, Lost Generations , No Country for Young Girls ? and Michael Jackson Comes to Manikganj . She was the executive producer and project director of the award winning Velvet Revolution produced by IAWRT, a documentary in which women journalists speak truth to power.

Nupur was a  visiting faculty at the J- School in UC Berkeley in 2010 and taught a course on “Ïnternational Reporting- India“. She lectures regularly on media at different institutions and serves on many Boards.