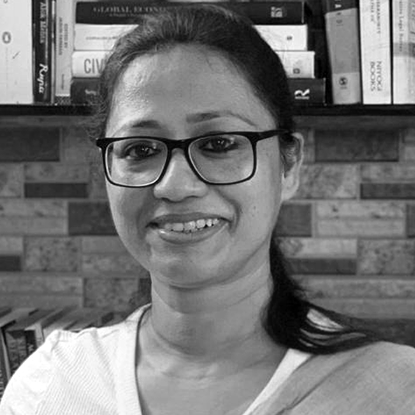 Mausumi Bhattacharyya, an Associate Professor in Journalism and Mass Communication,

Visva-Bharati – A Central University of National Importance, India, is into university teaching and research for the last two decades. She was attached with the Centre for Culture, Media and Governance, Jamia Millia Islamia University, New Delhi as ICSSR Post-Doctoral Fellow (2017-19). She has been selected as a scholar by the US Government from India for the coveted Studies in US Institutes (SUSI) in Journalism and Media Program, 2016. She also received a prestigious post-doctoral research grant by the International Association of Women in Radio & Television (IAWRT)-FOKUS, Norway in 2015. She was selected in the ‘National Mission on Education through ICT’ by the MHRD, Government of India to coordinate the ‘Gender, Media and Society’ section of the ‘Media and Communication Studies’ of the e-PG Pathashala course. She has been attached with the “People’s Archive of Rural India”(PARI) since its inception as one of its core members . She is one of the pioneering members of the Young Leader Think Tank(YLTT) of Friedrich Ebert Stiftung-Germany – India chapter. She was involved with the formulation of the ‘Youth Agenda of India’​ by YLTT. She was nominated from India for an ‘International Learning Project for Shaping Globalization’ held in Bonn, Germany in 2010.