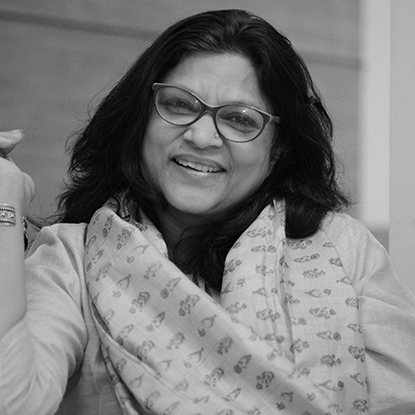 Archana Kapoor is a community media broadcaster, an independent filmmaker and author. She is the founder of Seeking Modern Applications for Real Transformation (SMART) – a nonprofit organization that works with marginalized communities in India and runs a two-time national award-winning community radio, Radio Mewat, which reaches over 500,000 people. In 2018, she launched India’s first ever Radio Festival to celebrate sound across radio formats – private, government and community. SMART uses information and communication for development, and empowerment of marginalized communities.She has been a speaker at the TED x in Washington DC as well as at the 62nd Commission on Status of Women, besides many other forums.  She has developed and authored a toolkit titled Communicating SDGS- A toolkit for Community Radio with the sole purpose of demystifying the Sustainable Development Goals for communities. She has been the recipient of several awards- Two National awards for her Radio station, The Devi Award – for women who have made a difference, has been featured in the Vodafone coffee table –Women of Pure Substance, been featured in Tejasvini, a show on women achievers and on All India Radio and in Discovery India for the spectacular work done by her and her stations during the Pandemic.