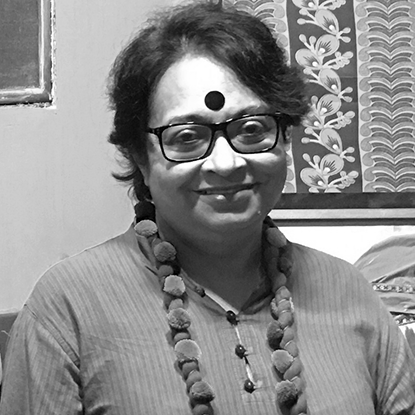 Ananya Chakraborti is the Chairperson of the West Bengal Commission for the Protection of Child Rights. She comes with over twenty years of experience in print and television media. She has worked

with leading newspaper houses and television channels in Kolkata and New Delhi. She is also an award winning documentary film maker, a gender rights activist and an academician with specialization in foregrounding the marginal and excluded voices of society. She has had a long association with Mahasweta Debi in many of her works.

Ananya Chakraborti’s body of work (comprising of columns, television programmes and documentaries) revolves entirely around the rights of women and children. She has worked extensively on trafficking in

South Asia. Her documentaries are critically acclaimed and have been shown in festivals around the world, including

at the United Nations. Ananya Chakraborti is a former Vice President of “International Association of women in Radio and television” and is also a member of NWMI (Network of Women in Media, India). Before joining the commission, she was an assistant professor at St Xavier’s College, in the department of Mass Communication & Videography.